In September I found a ruptured melanoma under Kiwi’s tail. Grey horses very often develop melanomas and Kiwi has quite a few around his dock that I keep an eye on. It was shocking to see a huge ball of fluid under his skin and within three days it had ruptured outwards. The vet came with antibiotics and I’ve been keeping the area clean as it drains fluid and heals from the inside out. Kiwi’s been a star the whole time; standing patiently whilst the vet gave him injections in his neck and every evening since as I’ve examined the area and sponged him clean.

We had an extremely hot summer here and as a result the grass didn’t grow. Kiwi lost weight over the summer for the first time. Being that he’s unwell and not well covered, I put him on his winter diet – in September!

First thing in the morning I turn him out into an unused paddock with a big bowl of breakfast and then after work I put him back into his paddock with a rug and another big feed. He also has a big flap of hay to munch on overnight. I can’t say I’ve enjoyed adapting to getting up at 6am and going to the yard before work but now it’s part of my routine and I like seeing the sunrise from Kiwi’s field. (I tend to sacrifice making my bed in the morning for a few minutes longer snuggled under a warm duvet). I drive up with Oscar, get Kiwi sorted for the day and poo pick his field before heading back to feed Oscar and myself breakfast and get ready so I can be at work for 8am. On the weekends, Kiwi has to wait longer for breakfast as I enjoy my lie in. 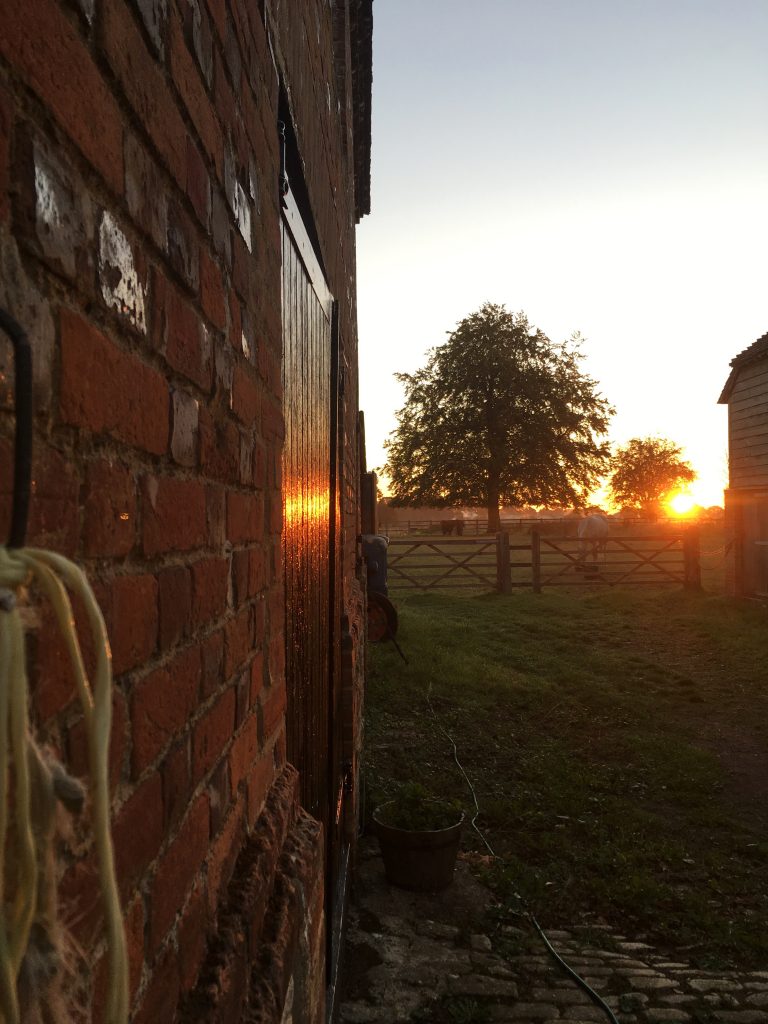 This year, the Horse Chestnut trees that adorn the road up to the village green have yielded an excellent haul of conkers. I love finding my first shiny conker beside the road on the walk up to Kiwi. Occasionally they fall from the trees whilst you’re walking underneath and It’s a little daunting to think of something that hard and spiked dropping from such a hight onto your head! The land is growing tentatively greener as we finally have some well needed rain. The trees all around us are dropping leaves in beautiful bold oranges, yellows and browns and the days are cooler and crisper. There are plenty of still green trees lining the roads and we have glorious sunny days when the sky is illuminated and the air is warm but the temperatures are dropping sometimes as low as 3 degrees at night. For the first time since Kiwi moved to live outside 24/7, I found him cold on a September morning. He felt warm at the base of his ears and behind his shoulder but he was shivering and clearly had been all night. He now wears his rug when the temperature drops below 13.

I’ve always been sensitive to the cold and sitting at a desk at work for long periods used to be a struggle. That was until I realised I could keep a hot water bottle in my desk. I fill it up in the morning and keep it on my stomach during the day. The office I work in is very laid back and no-one minds me wearing a wooly jumper when it gets cooler.

My days seem packed full at the moment. Kiwi in the morning before work, then straight home from work for a cup of tea and a change into warm clothes for the yard. Oscar and I walk up to put Kiwi away and prepare his feeds, water and fields for the following day. The days are steadily drawing in quietly but surely. I don’t know if it’s just me but with shorter days and increasingly darker evenings I feel less inspired to think and plan, or be creative and more like cosying up with my laptop and a film in the evenings.